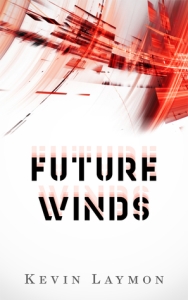 Set in a science fiction setting with elements of twisted horror, Future Winds is a strange yet wondrous tale of species self-preservation and the all-out moral cost of survival. Forced to leave earth, humanity discovers a planet capable of supporting life and hatches an audacious plan that will warp them across the universe to settle and begin anew. There is a darkness that resides below the planet’s surface, but with no option to turn back, humanity must find a way forward.

Buy it on Amazon

Read the Author’s Interview (Which you should. It’s pretty cool stuff.)

Normally, I’ll start writing a review immediately after I finish a book. I’ll brainstorm the points I want to make, and my overall thoughts. But with Future Winds.. after finishing I felt nothing but shock. Let me tell you, this book has one hell of an ending. Like Girl with all the Gifts style, but better. I wasn’t at all expecting what was going to happen, and it was like a cherry on a piece of sci-fi-pie. (Is that cheesy? It’s totally cheesy. I’m leaving it in there anyway.)

As for the rest of the book, I was enamored. The characters alone had me hooked. Not only are they all incredibly diverse- from personality to ethnicity- they are all so unique. This was a multi-viewpoint book, and normally with those you have your “main character” and everything else is just flavor text. Not with Future Winds. Each character was so well written with their dynamics and their separate conflicts that Laymon could have written a story about any one of their perspectives, and it would still be interesting. My favorite character was Aries, an artificial intelligence drone. I loved the line between human and robot presented by this book, especially during one particular part that I’m not going to spoil, but that scene alone made me want a sequel. But to piece all of the viewpoints together gave so many perfect views of a world that is corrupt to the core, and seeing this from all these different eyes and angles creates a world that is completely three-dimensional.

And that’s another thing! The world! It was so well written that I feel like I could easily draw every aspect of it. Everything was meticulously described, so it’s easy to imagine the kind of strange world the characters are entering, but it’s not detailed to the point of tediousness *cough* Ayn Rand *cough*. Nothing important was left to the imagination, and I think that maybe that’s why, days after reading it, I’m still constantly picturing this world and the characters in it. (Not that it’s at all a pleasant picture.)

It is dark. There are a lot of gorey, nasty moments, but what’s really dark about the book is the overall tone. Laymon, through his novel, makes a commentary on government power, big corporations, and the darkness of the human nature. Reading it, I felt constantly trapped and anxious, and there were parts that made me gasp out loud even though no one else was in the room with me. (If anyone else has read this, message me. I need to talk about what happened to Lucas with somebody.)

But it wasn’t all perfect! Things I didn’t like:

Future Winds just leaves so much to think about, particularly with the symbolism presented by the Overlords in the book, I definitely want a sequel! I feel like there was one chapter in the book that could have been an entire novel in and of itself, and I’d love to see the author elaborating on the world he’s created. This is a book for people that like to delve into the deeper meaning of things, that want to have an intellectual conversation about symbolism and secrets. If it didn’t have so much blood and cussing I’d recommend it for an English class. But if you’re not into that, it’s good at surface value, too.

Overall, I loved Future Winds. It was brilliant in its realistic characters, inventive scenery, and underlying message. This debut shows an author with so much potential, and I can’t wait to see what he comes up with next!