Spyro is a dragon that’s been near and dear to my heart since I was little. The classic Spyro games were some of my very first, and even after I’d won them all, I’d spend HOURS just messing around as the little dragon. So when someone approached me about making one, I was thrilled to have a shot at crafting the little dragon!

And I think he came out pretty well! 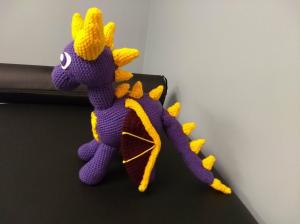 I actually made a pretty big mistake while I was crafting him: my customer wanted him to be 9″ tall, but I forgot to calculate the horns when making him, so he ended up a whopping 14″.

The felt eyes are also new for me. Up until now, my eyes have either been buttons or crocheted, so I was pretty nervous about the idea of cutting them out. (Drawing is not my strong suit.) But it actually worked fairly well! Here’s a picture of him in the shop where I sent him off. The lighting’s not great, but I think it shows how well he stands up on his own. 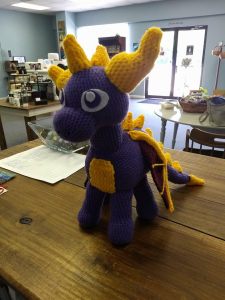 Overall, I’m pretty pleased with the outcome! After sharing the pictures online, I already got two more orders from other Spyro lovers. It’s good to be able to pass on something like this to someone I know will appreciate it.