A little while ago, I asserted that I could crochet anything, (not cocky at all, right?) and so I was really put to the test. I play D&D with a group of people, and one of them has a character that looks like this:

I did a giveaway on the discord we’re all on, saying I would crochet the character of the winner, and guess who won? The most complicated concept! Looking at this I had no idea how I was going to pull it off..
But here’s the result: 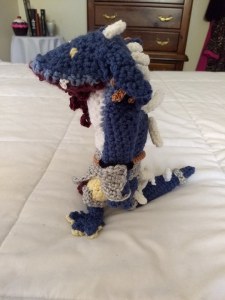 To make this guy, I had to re-work my entire process for crochet. Usually I crochet in round, starting from the beginning, but Nakamoto’s face wouldn’t look right made that way, so instead I had to craft each piece individually and sew & stuff them all together.

Overall, it was a great experience to figure out how to do something new. And although there are certain things about it I don’t love, he was a lot of fun to make and I’m overall pleased with how he came out. This has been one of my most difficult challenges in ages.