Notice how I made the title rhyme? This was done purposely.

So Mini Reviews are something I’ve never done before, mostly because I read waaaay too slowly for me to update this blog with all reviews in one post, but I’ve been really lagging on writing my reviews, so I think it’s about time.

This one has a theme: Hype Books!

(Which is pretty much the theme of every review on my blog, but – eh- who’s paying that much attention, anyway?)

The Girl on the Train by Paula Hawkins 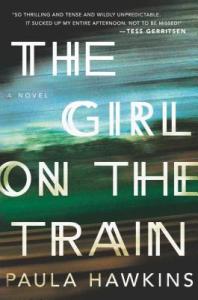 A debut psychological thriller that will forever change the way you look at other people’s lives.

Rachel takes the same commuter train every morning. Every day she rattles down the track, flashes past a stretch of cozy suburban homes, and stops at the signal that allows her to daily watch the same couple breakfasting on their deck. She’s even started to feel like she knows them. “Jess and Jason,” she calls them. Their life—as she sees it—is perfect. Not unlike the life she recently lost.

And then she sees something shocking. It’s only a minute until the train moves on, but it’s enough. Now everything’s changed. Unable to keep it to herself, Rachel offers what she knows to the police, and becomes inextricably entwined in what happens next, as well as in the lives of everyone involved. Has she done more harm than good?

I’m not so sure my thinking was “forever changed” by this one. It was an interesting story, for sure, but I don’t know where all the hype is based. It is fluidly written with a concrete plot and excellent character development, though. One of my favorite things about The Girl on the Train was the formatting. It was written in a “Morning, Evening” way, so there are major time skips in every chapter, which works very well with the main character’s alcoholic personality, because often she doesn’t remember what happens between the two, anyways. This also means the narration skips from present to past and back again constantly without being confusing, which does well for the pace. Overall, though, I was expecting something more unusual, and this one was pretty realistic- as far as murders go, I guess. This isn’t a bad thing, but it means the story itself is nothing uber special.