My Outrage at a Tumblr Post and a Review to Explain It- Review: The Silent Wife

I just found a Tumblr blog or feed or whatever it is they’re called, and at first I thought “This is pretty cool.” It’s not. “Go Book Yourself” is a feed that takes popular books you like and recommends other books you might like that are related. I got to A Monster Calls and saw that it’d recommended Everyone Sees the Ants and thought “yea, okay. That did have a similar feel, even if I didn’t even like ESTA that much.”

This makes me so angry!

I bought The Silent Wife only because it promised similarities to Gone Girl, which I loved, and I felt completely jipped!  The Silent Wife not only is NOT like Gone Girl, it’s the COMPLETE OPPOSITE. I wrote a review on it when I read it about a year ago, so I’m just going to let my past self speak for me when I say I’m suddenly sick of people recommending books based on popular books that you like. Especially when it’s just a marketing scheme. ESPECIALLY when it’s a marketing scheme that works. And now I feel dumb. MARKETING SHOULD NOT MAKE THE CONSUMER FEEL DUMB.

(P.S. I also didn’t like Reconstructing Amelia all too much so YOU KNOW NOTHING GO BOOK YOURSELF)

The Silent Wife by A.S.A Harrison 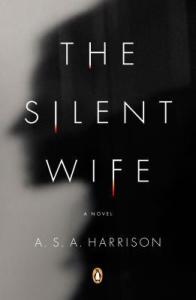 (Here’s where I’d add my “Add it on Goodreads” link if I thought that it was even a remotely good idea to add this on goodreads.)

My Thoughts (from the past):

I bought The Silent Wife immediately after reading a review on the back that claimed it was better than Gone Girl. I was sorely disappointed. The beginning of the book dragged on forever, and often it seemed as if there were no plot or point to the information I was receiving. And I was receiving quite a lot of information. A.S.A. Harrison meticulously describes every detail of Jodi and Todd’s average lives, down to how Todd brushes his teeth, (the fast, but WRONG way.) I am not by any means a murderer, but by the time I got halfway through the book and Todd still wasn’t dead I was ready to strangle the man myself and be done with it. I began to write in my head what I would say when I reviewed The Silent Wife, and it wasn’t going to be nice.

But that was halfway through the book, and now that I’ve finished it I have to say that The Silent Wife changed from a book I couldn’t wait to finish to a book I couldn’t wait to continue. Everything seemed to happen all at once and suddenly there was conflict and engagement and surprises, and I very much enjoyed myself once I got to the action. The main characters are deep and philosophical and Jodi’s decent into madness was both believable and interesting. In the end, I thoroughly enjoyed The Silent Wife. Well, most of it. Half of it.

I do think it was a big mistake mentioning Gone Girl, though. Not only does it set standards far higher than this book, in my opinion, can reach, but Gone Girl and The Silent Wife are literally opposites. In Gone Girl, there was a murder at the very beginning of the book and it was the main plot point. In The Silent Wife the murder wasn’t until the very end of the book and how it was going to happen was the main plot point. In Gone Girl, you have no idea how the victim disappeared, and why, and in The Silent Wife it tells you right at the beginning that Jodi will be murdering Todd. No mystery to it. They really are completely different, and I don’t think they should have been compared at all.

Spoiler Tidbit: A lot of the chapters are dedicated to Jodi’s past with her brothers, and in the end it comes to the conclusion that Jodi was abused as a child. This is told at the very end, and I don’t really understand the point of it at all. It didn’t seem important in Jodi’s decision to murder Todd, because through all of the events that happened, in the end it was Alison that convinced Jodi to go through with it and Alison who did all of dirty work, anyway. It doesn’t make sense that that one childhood problem shaped her significantly as an adult, because Jodi is a compliant person, and during the event in question she was not compliant at all. Nor did she learn to accept things as they were. I just don’t understand the point the author is trying to make with that last twist, unless they believe that Jodi’s circumstances alone weren’t enough to push her to murder, which I doubt because I think the descent was very well written and the beginning of the book foreshadows a change in Jodi that she would not have thought conceivable. So if anyone has read the book and has any thoughts on why the author put that piece in, I’d love to hear them.

Disclaimer: The amount of rantiness of this post may make it seem like less than a three-star book, but the three-star rating is my thoughts on the book itself. If I was rating the idea to associate this book with Gone Girl in any way, it’d look like this:

(Zero stars. It would look like nothing at all. Because I hate people now.)

(But not you. Thanks for reading, you’re amazing.)

11 thoughts on “My Outrage at a Tumblr Post and a Review to Explain It- Review: The Silent Wife”

Leave a Reply to Charnell @ Reviews from a Bookworm Cancel reply