Review: The Vegetarian by Han Kang 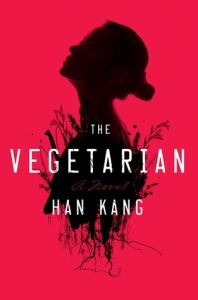 Before the nightmare, Yeong-hye and her husband lived an ordinary life. But when splintering, blood-soaked images start haunting her thoughts, Yeong-hye decides to purge her mind and renounce eating meat. In a country where societal mores are strictly obeyed, Yeong-hye’s decision to embrace a more “plant-like” existence is a shocking act of subversion. And as her passive rebellion manifests in ever more extreme and frightening forms, scandal, abuse, and estrangement begin to send Yeong-hye spiraling deep into the spaces of her fantasy. In a complete metamorphosis of both mind and body, her now dangerous endeavor will take Yeong-hye—impossibly, ecstatically, tragically—far from her once-known self altogether.

A disturbing, yet beautifully composed narrative told in three parts, The Vegetarian is an allegorical novel about modern day South Korea, but also a story of obsession, choice, and our faltering attempts to understand others, from one imprisoned body to another.

A very plain woman refuses to eat meat. Then she goes crazy. Then everyone else goes crazy.

I think The Vegetarian was a really hit-or-miss book, and it was a bit of a miss for me. I enjoyed the language and the story, but there were a ton of things in the plot I just didn’t get, the biggest of those being the symbolism of the plant references. I can feel that there’s deep meaning there, but I just couldn’t figure it out, which was a tad frustrating because I feel as though it could have been fantastic for me if I’d just understood it.

Something I really enjoyed about The Vegetarian was having a glimpse into a different culture. The book is translated into English, so you can really get an authentic look into South Korean culture from it. But sometimes this also aided in my missing the meaning, because there were points where the characters responded to events in really odd ways, and I wasn’t sure if that was part of the culture or just everyone going crazy. Or just those characters’ personalities. Makes me feel a little dumb, honestly.

10 thoughts on “Review: The Vegetarian by Han Kang”