Review: We Never Asked for Wings by Vanessa Diffenbaugh 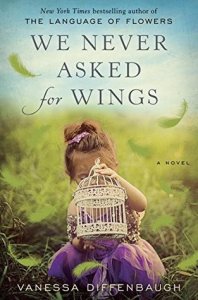 From the beloved New York Times bestselling author of The Language of Flowers comes her much-anticipated new novel about young love, hard choices, and hope against all odds.

For fourteen years, Letty Espinosa has worked three jobs around San Francisco to make ends meet while her mother raised her children—Alex, now fifteen, and Luna, six—in their tiny apartment on a forgotten spit of wetlands near the bay. But now Letty’s parents are returning to Mexico, and Letty must step up and become a mother for the first time in her life.

Navigating this new terrain is challenging for Letty, especially as Luna desperately misses her grandparents and Alex, who is falling in love with a classmate, is unwilling to give his mother a chance. Letty comes up with a plan to help the family escape the dangerous neighborhood and heartbreaking injustice that have marked their lives, but one wrong move could jeopardize everything she’s worked for and her family’s fragile hopes for the future.

Vanessa Diffenbaugh blends gorgeous prose with compelling themes of motherhood, undocumented immigration, and the American Dream in a powerful and prescient story about family.

I was recommended this book by a friend who knew how much I loved The Language of Flowers, Vanessa Diffenbaugh’s debut novel, and received We Never Asked for Wings from NetGalley in return for an honest review.

Similar to The Language of Flowers, We Never Asked for Wings is widely about family and personal growth, and it was wonderful to watch the main character, Letty, as she learned about her own children after being abandoned by their former caretaker. It was sweet and refreshing to see her slowly change from a selfish, childish, dependent individual into a caring and (mostly) responsible mother, and I think the change was done excellently. Know how in some books there’s a chapter midway through talking about all of the changes that’ve happened and a person’s new schedule? It’s hard to explain but it happens a lot. Not in this book, though: the change in Letty’s character is so gradual and realistic that by the end she is a completely different person, and all without the middle montage.

The children in the book were wonderful, too. Smart and completely realistic- not always knowing what they needed but loving Letty even though they knew it wasn’t her. I also liked the way Letty’s mother was characterized. She was controlling and caring all mixed in one, making Letty’s thoughts on her as complicated as a real daughter’s thoughts would be.

Overall, this book is just completely real. We Never Asked for Wings is a story about a realistic family and a woman’s change into a mother after years of doing her own thing. It was a sweet and refreshing read, good for someone angry at their parents or missing home.

4 thoughts on “Review: We Never Asked for Wings by Vanessa Diffenbaugh”