Book Review: I Take You by Eliza Kennedy 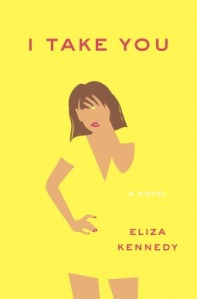 Lily’s fiancé Will is a brilliant, handsome archaeologist. Lily is sassy, impulsive, fond of a good drink (or five) and has no business getting married. Lily likes Will, but does she love him? Will loves Lily, but does he know her? As the wedding approaches, Lily’s nights—and mornings, and afternoons—of booze, laughter and questionable decisions become a growing reminder that the happiest day of her life might turn out to be her worst mistake yet.

Unapologetically sexy with the ribald humor of Bridesmaids, this joyously provocative debut introduces a self-assured protagonist you won’t soon forget.

I received I Take You from Blogging for Books in exchange for an honest review.

A cute cover, interesting premise, and feature in one of my favorite magazines had me really excited to read I Take You, and I wasn’t disappointed. Although Lily Wilder is incredibly irresponsible, childish, and slutty, I didn’t hate her as much as I anticipated. The entire book was set in the first person with Lily as the narrator, and when I started reading I thought “oh, well if it was third person that’d be fine, but spending an entire book in this nutjob’s head? That’s not going to work out.” But somehow, Lily’s shallow, irresponsible thoughts didn’t take away from the enjoyment of the book. Tangled in disaster as it was, I Take You had a very light and enjoyable tone, and it was exactly what I was looking for when I picked it up.

I think the worst thing about I Take You was its believability. I went into it already not expecting realism (because I like to think that all brides-to-be are loyal, faithful, responsible adults,) but there were some points in the book where I was thinking “absolutely no way would that ever happen.” Especially with the convenience of the ending; it was just too much of a coincidence! Actually, Lily’s whole relationship with her fiance was a coincidence. But, again, I wasn’t expecting to believe in this book, so all of this is forgivable.

My absolute favorite thing about the book was Freddy, Lily’s best friend. She breaks the trend of so many shallow, stupid, bookish best friends (a real pet peeve of mine) and was not only nonjudgmental to Lily’s behavior, she was always looking out for Lily and gave her amazing advice. Usually in a book, you get a smart, quirky, interesting main character that has a boy-crazy, fashion-obsessed, very basic best friend, but this book actually reversed the two roles, which made it very interesting for me.

Overall, I Take You was an enjoyable and cute read, and I’d be interested to see what others thought about it!

7 thoughts on “Book Review: I Take You by Eliza Kennedy”