A Light and Fun Read- Book Review: There’s Cake in My Future by Kim Gruenenfelder 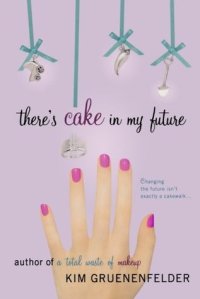 After listening to her closest friends’ latest travails in love, parenting, and careers, superstitious bride-to-be Nicole (Nic) believes she has the perfect recipe for everyone’s happiness: a bridal shower “cake pull” in which each ribboned silver charm planted in her cake will bring its recipient the magical assistance she needs to change her destiny.  Melissa (Mel), still ringless after dating the same man for six years, deserves the engagement ring charm.  The red hot chili pepper would be perfect for Seema, who is in love with her best male friend Scott, but can’t seem to make their relationship more than platonic.  And recently laid off journalist Nic wants the shovel, which symbolizes hard work, to help her get her career back on track.  Nic does everything she can to control who gets which silver keepsake – as well as the future it represents.  But when the charmed cake is mysteriously shifted from the place settings Nic arranged around it, no one gets the charm she chose for them. And when the other party guests’ fortunes begin coming true, Mel, Seema, and Nic can’t help but wonder…. Is the cake trying to tell them something?

Loved it! I got exactly what I expected out of “There’s Cake in my Future,” and I couldn’t have been happier with it. It’s a chick-lit that follows the story of three best friends in their different stages of love: one getting married, one wanting to get married, and one thinking she just wants a hot romance. But when a cake pull (which is a beautiful idea, by the way) goes awry, all of the girls end up with something else. This book was light, fun, sweet, and don’t you just love the cover?

Plus, I used it for Spine Poetry for BEA!

Buuut moving along, more detail. I loved how what was happening to Nic and Mel turned to utter devastation (because I’m cruel like that) during the course of their romances. Their attitudes in the face of (light) tragedy made the book worth reading. I loved Mel’s screw-it-all-and-go-nuts personality and even Nic’s constant comedic groaning. As for Seema, I generally hate the whole pining-after-someone-for-the-majority-of-a-book-because-we-both-know-we-want-each-other-but-neither-of-us-admits-it-because-we’re-too-sissy-and-also-the-book-would-then-only-be-three-pages-long plot device, but when it came to Seema, she had legitimate reasons to believe Scott wasn’t into her at all, and even I wasn’t sure, which is new because in a romance, the reader is always sure. Sometimes the half-flirty way they treated each other was ridiculous to me, and I just wanted to say “the line’s right there! Just jump over it!” because no woman should fall asleep in the arms of a man when she’s not sure if he’s into her- you just can’t do that to yourself. But for the most part, Seema’s story was enjoyable, too.

Also, loved the flow of time that There’s Cake in my Future took. It began at Nicole’s wedding, rewound to the events before, and then continued the wedding and went from there. It was an unusual way to do things, seeing as the majority of the book was written linearly, but it works well for this one.

And although it was completely unrealistic, I loved Mel’s ending.

Hopefully there’s cake in my future.

7 thoughts on “A Light and Fun Read- Book Review: There’s Cake in My Future by Kim Gruenenfelder”